It has taken me nearly a decade to see the Vaccines for a second time. An unwelcomely long wait; that first time, in a cramped, clammy, crowded underground bar on Hamburg’s ‘mile of sin’, they blew me away with their energy, vim and talent. So much so that nothing – not my cold, my age, or my five-week-old baby – were going to stop me from getting to this gig. 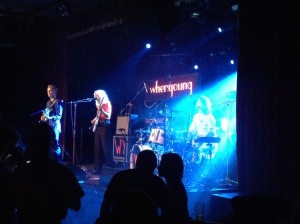 After the support trooped off – keep a beady eye out for the excellent whenyoung, especially the brilliantly coiffured drummer – on they came. The first thing that strikes is that they have, not unreasonably, got older. The straplings of the Reeperbahn have filled out, swaggered up, even grown in number.

The second, though, is the curious stage dynamic. While three of them dive straight into full-on rock bluster, bassist Árni Árnason and keyboardist Timothy Lanham more closely resemble people waiting patiently for a library to open, all planted feet and middle-distance stairs. Oddly, the imbalance works; their reticence leaves room for their more energetic bandmates to do their stuff. And while the supremely gifted lead guitarist Freddie Cowan, dressed in tight-white T-shirt and jeans, would splice seamlessly into any rock band from any era, it’s inevitably singer Justin Hayward-Young who draws the eye.

A little too much on occasion. There’s an overdose of knowing points into the crowd, and on occasion his stage posturing veers dangerously close to school musical (over)acting – although credit is due to anyone who tries to swallow a whole mic live on stage. And these are minor niggles; overall, he’s the perfect frontman, with the voice to match the strutting.

And songs this good demand a little strut. The Vaccines don’t hang about, racing hyperactively through the set, their surfer-tinged and Joe Meek-dappled early hits expertly interspersed with tracks from the new album, with ‘Your Love Is My Favourite Band‘ standing out. Old and new dovetail neatly, and they’ve blended in nice touches of country rock, even a little Eighties disco – foretold by their stage entrance, all glitterballs and ‘Dancing Queen’ (reclaiming that song for a merciful nation from May’s awkward clutches).

Yet it is the anthemic old favourites that reveal the band at their best. ‘Wetsuit’, ‘Post Break-up Sex’ and ‘If You Wanna’ sound especially glorious, meshing brilliant guitar/drums work with memorable lyrics about adolescent insecurities and sexual frustrations that – allow me to reach for my Britpop crowbar briefly – are up there with the best of Pulp. So soaring are they that even the bassist is jiggling away by the end.

After that Hamburg gig, the Vaccines became my favourite band to have come around after I officially got old. By which I mean, when I stopped going to gigs simply because they’re gigs; I now only venture out for bands I know I’m going to like.

I knew I was going to enjoy the Vaccines, and they didn’t get close to disappointing. They even omitted ‘Wolf Pack’, meaning I got to moan on the way home about how they hadn’t played my favourite song, thus establishing my status as a long-term fan.

All in all, a perfect night out.