Mansun passed me by at the time. There I was, running around the student pubs of Sheffield, telling anyone who would listen why Longpigs were so much better than current flavours-of-the-month Kula Shaker, and before I had even got halfway through my in-depth analysis, everyone was talking about Attack Of The Grey Lantern being the best album of the nineties. And, while I was trying to scrabble together enough money to buy a copy, Radiohead released ‘Paranoid Android’, attention shifted yet again and I could thankfully dredge up my well-honed monologue about how Pablo Honey was loads better than The Bends, actually. 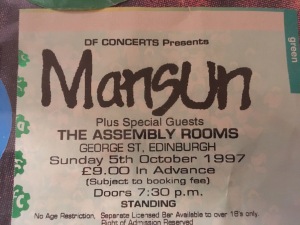 The net result is that I never got a copy of Mansun’s debut album. Music was expensive back then, with each album purchased (instead of burned or stolen) setting you back the best part of a tenner. With student grants only just stretching beyond Christmas, we had to be selective. The youth of today don’t know how luck they are. Yes, university fees are now nine grand plus a year, there are no jobs available and even fewer houses. But students today can listen to whatever they like, for free. And I don’t remember anyone eating avocado toast back then, either.

Praise the Lord for the gift of Spotify. While writing my Britpop-based book, I knew Mansun would have to be in there. So I listened to their back catalogue to see what I’d missed.

A lot, it seems. I knew the big hits, the ones that made the Shine compilations, like ‘Stripper Vicar’ and ‘Wide Open Space’. But there was so much more to enjoy; ‘An Open Letter To The Lyrical Taxpayer’ is a new favourite.

Is such widespread accessibility to music a good thing? It’s certainly convenient; if I hear a band I like on 6Music, I can simply add them to my playlist, safe in the knowledge that I’ll hear it again at some point in the future. And new bands now find it an easier to promote themselves and build a following, saving themselves (at least partly) from the whims of the record companies.

But do people develop the same obsession with a particular band, or a certain album, as we did back then? I played All Change on repeat for six weeks one summer, not just because I liked it, but because I didn’t have that many CDs back then (and when you’ve saved up your paper round money for weeks to buy a new CD player, listening to music on copied tapes no longer cuts it). As a result, I developed an affection for this album that will never die.

On the flip side, I was able to discover Mansun twenty years too late, without even having to leave my sofa or spend a single cent. Good for me, less so for them (I assume Spotify royalties take a while to tot up). So it’s a mixed bag, I guess.

And after that in-depth analysis of the state of the music industry, I’m off to listen to Kleptomania with some smashed avocado on toast and a decaf soya milk flat white.

Top three Mansun tracks (I feel a little unqualified to choose them, but here goes):